Drone Ground Penetrating Radar (Drone GPR or Airborne GPR) is a geophysical survey method flown on a drone (UAV), that uses pulses of electromagnetic radiation to image below the ground surface. It is both a non-intrusive and non-destructive method of surveying the sub-surface. It is therefore a very useful survey technique to investigate many soils and materials. Examples include the ground, concrete, masonry, and asphalt.

GPR works by sending a tiny pulse of electromagnetic energy into a material and recording the strength and the time required for the return of any reflected signal.

A scan is a series of pulses over a single area. Whenever the energy pulse enters a material with different electrical conduction properties or Relative Dielectric Permittivity (RDP) from the material it left, part of the signal is reflected. The larger the contrast in the dielectric constants and conductivities of the two materials, the stronger the reflection. This means that an electromagnetic pulse which moves from dry sand (dielectric of 5) to wet sand (dielectric of 30) will produce a very strong reflection, while moving from dry sand (5) to limestone (7) will produce a relatively weak reflection. Because GPR works best when there is a big difference in the electromagnetic properties of the materials being surveyed, metallic objects buried in soils, make ideal targets.

When we consider the table and the values for heavy soils and water, it is no surprise to learn that Ground Penetrating Radar will not work well in clay soils, particularly if they are waterlogged. Furthermore, the GPR signal is unable to penetrate through metallic objects, including very dense material reinforcement. This means that when the GPR signal (electromagnetic wave) hits a metallic target, a strong reflection would be expected with the rest of the signal energy being abated i.e. any objects directly below the metallic target, will not be detected for that scan. This is because the conductive properties of metal means any GPR signal will not pass through it but will instead resonate within it until there is no energy present. In essence, the greater the electrical conductivity of the subsurface materials through which a given electromagnetic wave (the GPR signal), must pass, the more reduced the penetration depth the wave will reach. It is worth noting that the power of the signal and its central frequency (as provided from the GPR antenna), will also have a bearing on the penetration depth.

Higher central frequencies provide a higher resolution but a limited depth. This means that GPR with higher frquencies can see smaller objects in greater detail than lower frequencies. Conversely, a lower frequency GPR provides greater penetration depth along with lower resolution. It is therefore rational to assume that depending on the application for which the GPR is being used, the correct central frequency must be used to get the best results. For example, it would be pointless using a 500MHz GPR for studying typical soil strata below 5m because the signal would simply not reach. However, using the same GPR to detect pipes buried at only 0.5m would be beneficial. In the same way, utilising a 125MHz GPR to detect small objects at 0.5m would be pointless as it would simply not have the resolution. However, the same GPR would be very effective for deep geophysical studies at 10m or more, where large sediment layers were being studied.

There are a varied number of applications for where drone GPR could be the right tool in the toolbox. Here are a few of the more well know applications:

Drone GPR utilises longer signal wavelengths that can penetrate 5-10m depth of water and even penetrate sediments below the riverbed or lakebed. For example, using a RadarTeam Cobra SE-150 with a central frequency of 125MHz, the GPR can take readings of a river’s depth, the depth of the soft sediments, the depth of the harder sediments below the softer sediments, and even the depth to bedrock. If the signal does not fully abate and can return signal due to a dielectric contrast being present (as discussed earlier), a detailed record deep in the earth can be recorded in the radargrams (aka GPR profiles). It should be remembered that Drone GPR will not work in salt water.

Types of GPR Use and their Central Frequency (MHz)

The UgCS SkyHub solution is a hardware and software set designed to enhance UAV capabilities for commercial Ground Penetrating Radar (GPR) surveying and inspection purposes. In essence, it is the onboard computer that it is at the heart of your UgCS drone-based geophysical sensor system. Where the sensor is the Ground Penetrating Radar or GPR, the collected data will be geotagged and stored in the UgCS SkyHub. Further more, for maintaining an accurate AGL for your drone and sensor, the True Terrain Following Feature (UgCS TTF), and if fitted, the UgCS Obstacle Detection Radar (UgCS ODR), works with the UgCS SkyHub in complete harmony.

For more information on the SkyHub, TTF or ODR systems, click here. 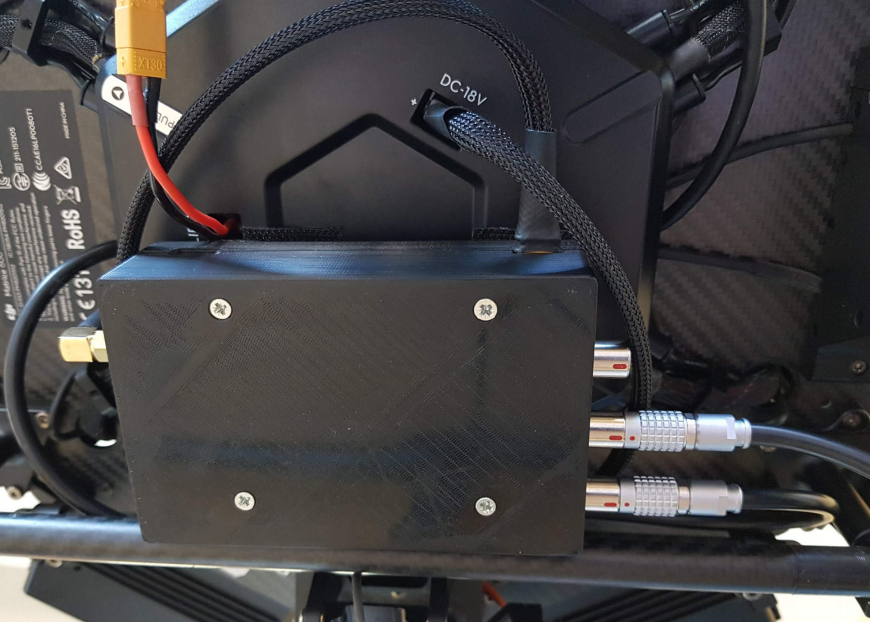 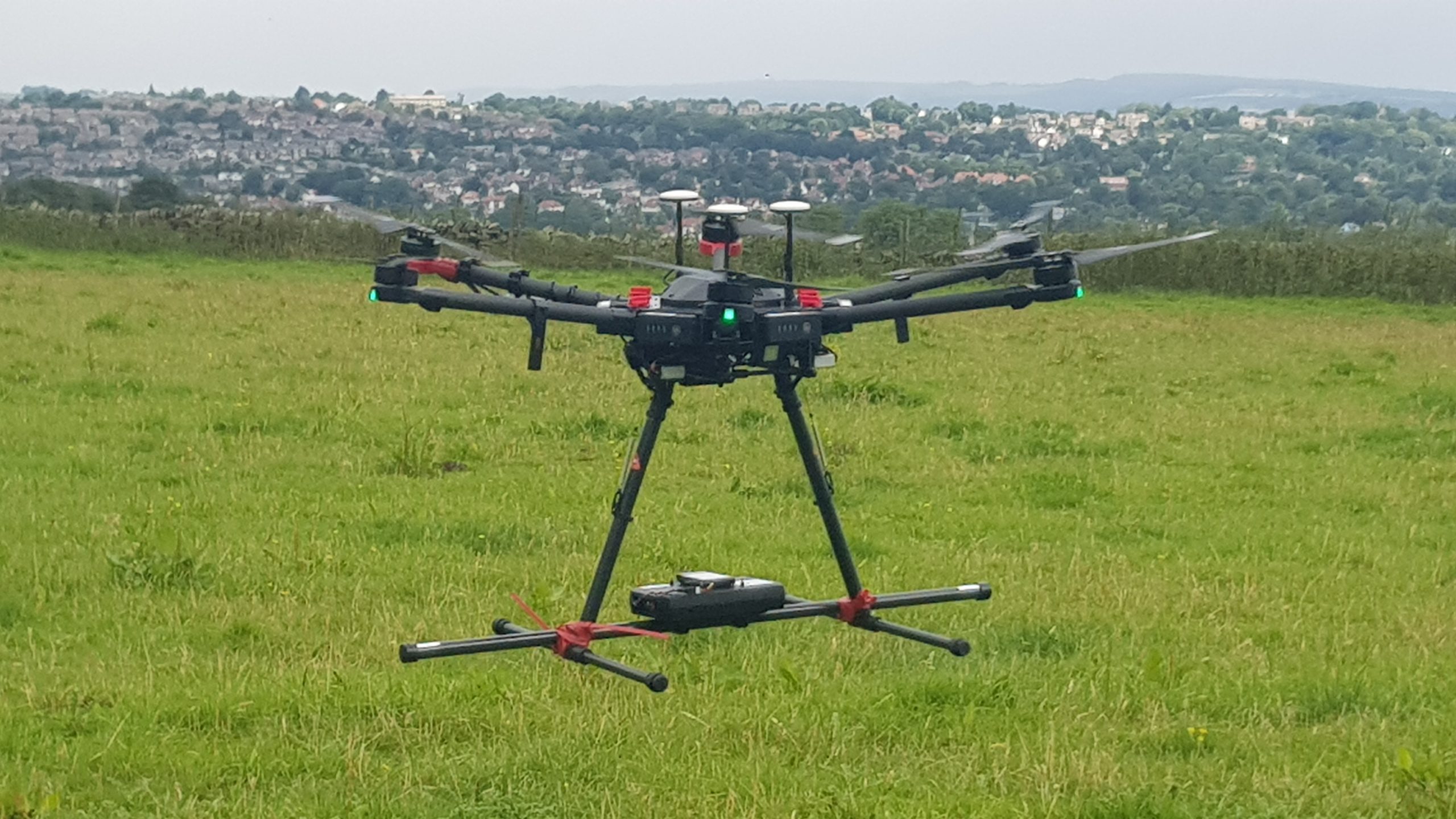 This website uses cookies to improve your experience. We'll assume you're ok with this, but you can opt-out if you wish. Learn More ACCEPT
Manage consent

This website uses cookies to improve your experience while you navigate through the website. Out of these, the cookies that are categorized as necessary are stored on your browser as they are essential for the working of basic functionalities of the website. We also use third-party cookies that help us analyze and understand how you use this website. These cookies will be stored in your browser only with your consent. You also have the option to opt-out of these cookies. But opting out of some of these cookies may affect your browsing experience.
Necessary Always Enabled
Necessary cookies are absolutely essential for the website to function properly. These cookies ensure basic functionalities and security features of the website, anonymously.
Functional
Functional cookies help to perform certain functionalities like sharing the content of the website on social media platforms, collect feedbacks, and other third-party features.
Performance
Performance cookies are used to understand and analyze the key performance indexes of the website which helps in delivering a better user experience for the visitors.
Analytics
Analytical cookies are used to understand how visitors interact with the website. These cookies help provide information on metrics the number of visitors, bounce rate, traffic source, etc.
Advertisement
Advertisement cookies are used to provide visitors with relevant ads and marketing campaigns. These cookies track visitors across websites and collect information to provide customized ads.
Others
Other uncategorized cookies are those that are being analyzed and have not been classified into a category as yet.
SAVE & ACCEPT